The new leadership of the Portland Trail Blazers held a press conference Thursday morning. Interim general manager Joe Cronin, president Dewayne Hankins, and head coach Chauncey Billups sat next to each other in  directors chairs, smiling, and at ease. No stiff suits, just wrinkled shirts. It was of such casual caliber, they called it […]

The Portland Trail Blazers fired general manager and president of basketball operations Neil Olshey Friday, citing violations of the Blazers code of conduct. The firing follows a nearly month long investigation into Olshey regarding accusations of workplace misconduct. Olshey, was informed Friday morning of the results of that investigation and of his termination, effective […]

The Lakers were without Lebron James Saturday night against the Trail Blazers, so things weren’t looking good from the get go. The Blazers got out to a blistering start, burying the Lakers from the very beginning, all the way to a 105 – 90 win that was a lot worse than it looked for […] 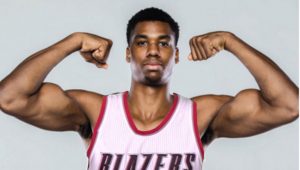 As I posted yesterday on S2 would be happening this morning, I was able to have a conversation with someone who has been very plugged into the NBA for a number of years and whose opinion I greatly respect. It has been suggested that Portland is one of the places that will get consideration for Whiteside’s services in what would easily be the biggest free-agent ‘get’ in the history of this franchise. Here is a summary of that conversation.

Portland is in the top-3 if not the top-2 of teams under consideration. Along with the Los Angeles Lakers and the Miami Heat, Portland will and already has garnered legitimate consideration. Now those three teams are in very different places and that is part of what goes into the presentations each team will give. (This was echoed by 1080 The Fan this afternoon from one of their sources as well.)

The Lakers will try to present to Whiteside that he can be the next in a long line of historical centers for that franchise. Wilt, Jabbar, and Shaq are a list of accomplished centers that few teams can compare to. The Lakers will trot out D’Angelo Russell, Jordan Clarkson, Brandon Ingram and Julius Randle as a starting four that just needs Whiteside to make them a young force in the NBA and can lead the Lakers back to NBA glory. Whiteside has commented on the ‘stars’ of the Los Angeles fan base but also has talked about high taxes in some states and what is the best ‘basketball’ place for him. The Lakers did have him in once before and cut him, instead going with Robert Sacre which might not sit well in his mind. What may also be a strong factor is that his friends and family prefer Los Angeles more than Portland and that can be a heavy influence on someone who, although is 27, is really only in his 2nd year of full NBA play.

The Heat are what he is most familiar with, the state has no income tax and it is also where he has experienced the most success. However not all was completely smooth in South Beach and if there is a 3rd place team in this race, it is believed to be Miami in this discussion as they can’t offer him more than anyone else like is usually the case as they don’t have full Bird rights on Hassan. He likes Miami but also understands that they are in a bit of flux as there are questions around Bosh’s health and Dwayne Wade will be 36 next season. Don’t underestimate the ability of Pat Riley to be the ultimate salesman though. He certainly won’t give up without a fight.

And finally we come to the Portland Trail Blazers. Dame, Adidas endorsements, trips to China. rap albums, CJ, media relations, a growing market presence, a rabid fan base, a young playoff team … there are a lot of things that Neil can throw out there to counteract any ‘small town’ disclaimers. Social media doesn’t recognize boundaries or borders and success will bring marketability as much to a winner as to a star on a bad team. Besides, Ingram is LA’s hot new Draft pick right after Russell was the year before. Does Whiteside think the Lakers are going to push him over their new shiny draft picks?  And don’t think that Russell’s outing of Swaggy P doesn’t play when recruiting against other teams. The Lakers themselves recognize that as an issue as they have seen some teammates isolate him or be very cold towards him in a less then tight locker room.

There is no issue with that in Portland. Dame would just as soon give a teammate credit as himself as long as they win. That locker room is one of the tightest in the NBA and that isn’t changing anytime soon no matter who comes in because Lillard is just that good of a leader. For his age, Hassan is a ‘young’ player that hasn’t experienced many of the things that players his age  have experienced and dealt with by now. He can be quirky, aloof and even off-putting at times but can also be very jovial and engaged. Instead of having been through the grind and experience of 5-7 seasons by this point in his life, he has been trucked, bused, trained and flown to arenas all over the world. There is a hint of still wanting to explore all the NBA has to offer for someone no longer on a minimum deal and that is something Olshey will have to determine and take into consideration. Remember, this isn’t a guy who was on a Rookie contract or a mid-level exception. This is a player that last season made $981,000 in a league of multi-millionaires. What does a ‘Max’ deal do to change that drive that treated any shot in the paint last season with extreme prejudice and disdain? Neil has his work cut out for him and in all likelihood, already knows where he stands with that.

So where does that leave it in the end? That Portland has as much of a shot with Whiteside as with any Free Agent in recent memory and that is no small thing. After just missing out on Greg Monroe last year, perhaps the basketball gods owe the Blazers one. If the decision were made in a vacuum, the feeling is that it is Portland. When you add in a larger urban city, the glitz, media, the superstar fans, possible endorsement deals, a young roster with 3 very high Draft picks, and pressure from friends and family, it swings the pendulum towards the Lakers just a bit. But it is close enough that the belief is that Neil Olshey could make a difference with the right approach and that Portland finally gets that ‘Needle Moving’ deal that Blazers fans have looked forward to.

Nurkic Will NOT Play Game 1 vs Warriors!

Jusuf Nurkic will not start Game 1 vs the Golden State Warriors — was pure speculation and hope for a Bosnian Beast show in the Bay Area this Sunday! For more opinions and fan commentary regarding the injury status of Jusuf Nurkic checkout the Portland Trail Blazer’s official fan forum at –> http://www.sportstwo.com/threads/official-nurkic-watch-thread.311980/ Apr 15, […]