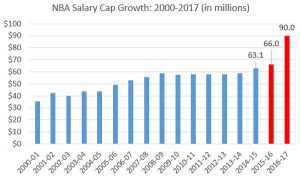 The new salary cap has been set at $94,143,000. Ever feel like you were in the wrong business or wish you were taller? The minimum salary cap is 90% of that number ($84,729,000). Portland spent a large part of the season under the 90% threshold last season until the Anderson Varejao trade.That is not likely to be a concern with the Blazers this year. Now that the Blazers have agreed in principle to a contract for 4 years and $70 million, Turner’s first year will pay him $16,400,000.

Where to spend much of Portland’s remaining salary cap is yet to be determined as restricted free-agents Meyers Leonard, Maurice Harkless and Allen Crabbe have all been made the Qualifying Offer giving the Blazers the right to match any other teams attempt to sign those players.

The vast majority of fans and the media thought that the first player the Blazers would go after would be a big man. Portland’s production at center and power forward left much to be desired at times; even when with Al-Farouq Aminu had more success at the PF spot, that is more a matter of match-ups than a recipe for long term success.

The NBA is certianly playing smaller at times. but at 215 lbs, one wonders if Aminu would hold up to the rigors of an NBA season with the pounding he would take at that position full time. Draymond Green, LaMarcus Aldridge, Blake Griffin and possibly Enes Kanter — those are the power forwards from teams that finished in front of Portland last season. On most nights, it wouldn’t be as much of an issue, but against the true contending teams, Aminu would be undersized, out-bulked or just out-muscled.

The big hole the Blazers have to fill is at center. While Mason Plumlee had a nice break out season as a first year starter, he is not a defensive presence, doesn’t have a low-post game, doesn’t shoot from the outside at all and blocks very few shots for a starting NBA center. He is one of the best passing big men in the league and had strong rebounding numbers in the 1st round of the playoffs against the Clippers, but some of that was by design as the Clippers completely ignored Mason to focus on double-teaming Lillard and McCollum at every turn.

Evan Turner addresses neither of those positions. Portland has, at various times, been linked in discussion to Dwight Howard, Hassan Whiteside, Paul Milsap, Pau Gasol, Bismack Biyombo, Ian Mahinmi, Al Jefferson and Cole Aldrich. Are you sensing a theme? All of those players bring a skillset in one way or another that the Blazers severely lack. Most of that is on the defensive side where Portland’s best option on defense is back-up, undersized Ed Davis.

So what are the options left available? Starting with the aforementioned salary cap, with the current cap holds for Leonard ($7.7M), Harkless ($7.2M), and Crabbe ($2.7M), with the signing of Turner and the renouncing of Kaman, Henderson and Roberts, the Blazers would have around $8.4 million to sign a big man.

Of the linked centers named above, only Pau Gasol remains an option for the Blazers. With the exorbitant amounts of money being throw around with the increase in the cap, he is not likely to be available for that $8.4 million a year.

That is where the tough decisions start.  Do you renounce Leonard or Harkless to create more cap space? Renouncing Crabbe would have little effect since his cap hold is so low at $2.7 million. Letting go of Leonard or Harkless moves that current $8,4 million up to around $15.6-16.1 million, and now you are able to sign another big man that hopefully helps Portland in the biggest remaining weakness … defense.

Leonard brings an outside stroke that few big men have, but he has struggled with most of the other aspects of his game. Harkless was a very pleasant surprise this season, can do multiple things on the court, and for such low acquisition cost, you hate to see such a good return on investment go for nothing. A sign & trade is possible, but due to changes in the last Collective Bargaining Agreement, you don’t see nearly as many of those as you used to.

What it may come down to is, are you willing to part with either Meyers Leonard or Maurice Harkless to add a more well rounded, older big man in Pau Gasol or to get a better defender than what we have? Festus Ezeli?

In this period of increased contracts, something will have to give.