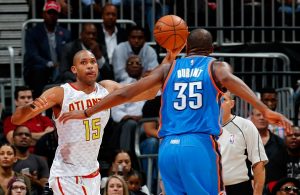 Yesterday we took a look at two of the ‘biggest’ names on the free-agent board. Centers Dwight Howard and Hassan Whiteside are largely viewed to be more likely to have a possibility of coming to Portland than either of the two we will examine today. Both Kevin Durant and Al Horford are very high up anyone’s free agent list but Portland does not seem to be on either one’s reported destinations so far. That doesn’t mean Neil Olshey can’t take a shot at getting them into a Blazer uniform but he likely already knows who is open to the discussion and who Portland really doesn’t have much of a shot with.

Kevin Durant is the ‘one that got away’. Most GM’s and pundits would tell you that Greg Oden was the obvious choice you had to make but one person in particular swore that Durant should be the choice. It’s not that he didn’t think Oden was a generational talent and no one could have imagined the way his body would let him down. Instead he based it on just a couple of things. Durant was a described gym-rat who lived in the practice facilities and had an extreme passion for the game. Oden said if he wasn’t playing basketball he would want to be a dentist. That Draft aficionado was adamant in his belief and hindsight being 20/20, he was dead right.

Durant will just be 28 when next season begins and is the elite scorer in the NBA. Numbers aren’t really even necessary as you know that unless Westbrook decides not to share the ball, Kevin is going to get you 25-30 points a night on a continual basis. He will also get you 7-8 rebounds, 5 assists and he blocked more shots per game as a SF last season than Portland’s starting center, Mason Plumlee.

But would he fit with the Blazers? The immediate reaction is a resounding ‘Yes’ but I’m not sure he meshes with what is Portland’s biggest need. Of course he can score and it would take pressure off of Dame and CJ from an offensive standpoint but can you not envision situations where there isn’t enough ball to go around?  Serge Ibaka was just traded because management felt he wanted to be a bigger part of the offense going forward and that was just with Westbrook as the only other big offensive option. In Portland, you already have two 20 ppg scorers and that means someone, or everyone is going to have to take a step back. It’s unlikely you would be getting 72 points a game from Dame, CJ and Durant so someone would have to take on the Chris Bosh role and be in the background a bit.  That worked in Miami because Bosh could focus more on rebounding and defense but that doesn’t fit any of the three in this scenario.  Portland needs more defensive help and someone who wouldn’t demand 20 shots a game but could still be relied on to be a solid 3rd option.

Enter Al Horford. The recently turned 30 year old center would seem to be the perfect combination of scoring, defense, and facilitator while taking a much more manageable 12-14 shots per game. He has played Center all of his NBA career but on the rare occasions a bigger line-up was needed, he could easily play PF as he did in college and at 6’10”, 245 lbs, that might help extend his career as he gets older. By contrast, a 20-year old Noah Vonleh who has yet to completely fill out is 6’9″, 240 lbs with a longer reach and greater wingspan.

Horford just came off a season where he averaged 15.2 points, 7.3 rebounds, 3.2 assists and 1.5 blocks while shooting over 50% from the field and a respectable 34% from 3-point range. Those aren’t the gaudy numbers that Durant puts up but it seems he would be a better fit from a balance standpoint and maybe even chemistry. This is Damian’s team and still would be if Horford were here. If it was Durant, you may have some personalities taking a step back where that is not their nature and ‘team leader’ or who is the biggest star is not an issue you want to have in flux. Not that Dame wouldn’t handle that well but there are potential risks.

After the trade that OKC made which was said to be “Durant approved”, perhaps his most likely destination is to stay where he has been and get the most money. Atlanta on the other hand seems to be in less of a stable position and might be due for a huge turnover. They just traded their starting PG and it doesn’t seem as likely that Horford will return there even though that has been the only place he has ever put on an NBA uniform.

Regardless of where they end up, while both would be ‘move-the-needle’ acquisitions for Olshey, the free agent winds that swirl don’t seem to be blowing in Portland’s direction for either player.