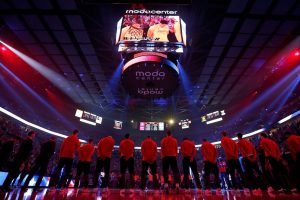 Monday night, the buzzer sounded and the Blazers season was over in a brutal fashion. I sat back in my Lazy Boy, watching as the Blazers and Warriors hugged it out, the ice in my glass of rum melting away, simulating the Blazers game four performance. I was full of emotion, mostly negative ones, as my team exited stage left. I felt depressed, angry, bitter at the Warriors who so indestructibly trounced the Blazers in four games: broom drop. But, underneath all of that disdain for the leagues best, under all the pain for the ending of the Blazer’s season, there was another feeling, one that came from the other end of the spectrum: relief. I was relieved that it was over.

I took a drink and with the tip of my fingers searching for answers in my beard, I looked back on this arduous season to find the gems in the mud. There was a lot of mud. Evan Turner struggled to mesh with his new team, and integrate within the Blazers system. Allen Crabbe and Harkless pressured perhaps by the expectations of their bulging contracts, could not seem to find the needed consistency to bring their game to the next level. Meyers Leonard spent the season just trying to find his footing after a summer marred by injury in which he could not train or work out. It never materialized. But, there too are some gems. Jusuf Nurkic came to town just before the end of the trade deadline and changed the very aura of the game for the Blazers. He inspired Noah Vonleh who is finally developing into a respectable player. Damian Lillard and CJ McCollum have become the highest scoring back-court in the league.

I thought to myself why be angry? Why feel devastated? I realized I was too caught up, something so easy to do for a fanatical fan like myself, and that I was looking at the Blazers far too myopically. I decided to take a further step back to see the bigger picture. The Blazers started rebuilding just last season, after most of our roster left, finishing 44-38. This was only the second season of that rebuild, we finished 41-41 just 3 games behind. Those kind of results for a team that is rebuilding are unheard of. In most rebuilds it takes years to find winning ways again, some spend years in the dungeon, but the Blazers are resilient. Last season they played far beyond expectations, setting an impractically high bar for this season, that could not be met.

The Blazers then are not failures, there is not something horribly wrong as a certain bald-faced sportswriter contends. The Blazers are where they need to be. A teams growth during a rebuild is not always linear as this season as has proven. The fans and players alike wanted to step into the identity of a contender, became set on expectations for this season that were unrealistic. The Blazers made the second round last year, so this year they must make it there again at least, if not further….um no. The Blazers fresh off a summer where gargantuan contracts were handed out like Gatorades, stumbled into the season, weighed down by the pressure to perform at a level they weren’t quite ready for. The result was a losing record much of the year, injuries across the roster, not to mention broken egos and spirits. The pressure proved to much and the Blazers collapsed beneath it, nearly.

The tortoise however, always wins the race. The Blazers like last season after a similar slow start, played an inspired late season run, helped by newly acquired big man Jusuf Nurkic. The hangover from those early season woes seemed to vanish, as the Blazers played with a renewed energy and fight, they brought that exciting brand of basketball the fans are accustomed to. The Blazers made a mad dash for the 8th seed and a place in the playoffs. Some fans however, were of the idea, that it would be better for the Blazers to miss the playoffs, that there would be nothing to gain from a first round showdown with the Warriors. It would be better, in this frame of thought, to lose and take our chances with the lottery. Many other fans, myself included rejected this idea, and I’ll tell you why. Its about fostering a winning culture, there is something to gain, even in getting swept by Golden State. It builds up that insatiable hunger to win, it puts those chips back on the players shoulders, removed last summer by massive paydays. It gives the Blazers, the youngest team in the league, not only playoff experience, but that tearing out of the heart, gut wrenching, anguish of being swept, a feeling they will be keen not to suffer through again.

So, next year when the Blazers begin the season they will have the series with the Warriors in the back of their minds, and they will play their hearts out not to be put in that position again. That means winning, and winning early, having a successful start, and keeping the momentum going through the season, to place in a higher seed come the playoffs. Rather than just putting this past season behind them, they can use it to inspire growth and start fresh with a healthy Jusuf Nurkic and a rested roster. Players who under-performed can return in better shape, the pressure valve released, and realize their potentials.

First, though comes the summer, and there is a lot of work ahead. Olshey has three picks in the draft that he seems to be more on the side of trading for established, capable players and veterans who can help the Blazers take the next step, rather than restocking on rookies. He will look to teams who are tearing the walls down to the studs, rebuilding, and teams with no picks. There are six teams with no 1st round draft, including Golden State and Cleveland who will be of little help to us, (Not to mention one of our picks is from the Cavs.) The Clippers, the Pelicans who traded their pick to Sacramento, Memphis, and possibly the Lakers, who have a pick unless they fall out of the top three in the lottery.

The Kings, Nets, Suns, Lakers, Knicks, and 76ers are among a hand full of teams who are on the rebuild and could use first round picks. General Manager Neil Olshey has limited options, and so must milk those resources. He will have to move a heavy contract or two along with the picks, to make cap room for guys he will bring back. It will not be an easy task. Many of the Blazers contracts are not exactly appetizing considering last seasons performance. But, if anyone can sell a lemon its Neil Olshey. That said, Neil has let on that he will be depending mostly on internal development for the progression of this team, meaning look for most of the guys on the roster now to still be here in September, mostly because those contracts are going to be hard to move, but as well because Neil is not a sell low guy. That said, there will be moves made, and you can expect most of them to come on draft day.

So, with a retrospective measure of this team, I assuaged myself and I stared out the window towards summer, and saw a bright future. Now, that could have been the headlights from a passing car, but whether that light is metaphoric or not, I believe the best is yet to come. The Blazers already have the highest scoring back court in the NBA in Dame and CJ, found the center of the future in Nurkic, now its time to shore up the supporting cast, and bring this team to the next level. I am excited for what lays ahead of this team. After watching the exit interviews I am confident in the front office, in the players, I am ready for what next season brings. That said, we as fans have to remember not to get ahead of ourselves, to level our expectations. Oh and lastly, yes Denver, I will enjoy my summer because I am relieved.