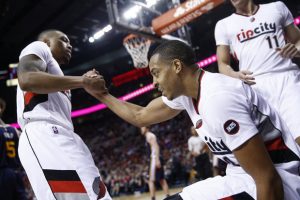 Last year the Blazers looked primed to be a dark horse contender for the championship. Behind the offense of Lillard and Aldridge, the iron defense and 3 point prestige of Matthews, and the Renaissance man esque play of Batum and Robin Lopez, the Blazers looked to make a crater in the playoffs with their explosive play. Then came March and with it the beginning of the end of an era. Wesley Matthews in a dumbfounding moment took a wrong step and tore his achilles tendon. A collective sigh of Blazer fans, and a familiar pang of what could have been, filled the Portland air supply. The Blazers lagged and staggered their way to the playoffs, sans their heart, and collapsed in the first round to the Grizzlies. The same old tune.

Still, the heartache wasn’t over. With free agency looming the Blazers had a plethora of contracts at their ends. The biggest belonging to self proclaimed “Blazer for Life” LaMarcus Aldridge(enter your funny name here) who seemed as indecisive as Charles Barkley at an all you can eat buffet. With his future hanging precariously in the balance, Neil Olshey, the Blazers general manager, decided to act, putting moves in motion to help the team, regardless of Aldridge’s decision. First he traded Nice Batum for Noah Vonleh and Gerald Henderson. Blazer fans gawked, wondered what Olshey must be thinking. The Blazers then signed Davis and Aminu, and tried futilely to lure Greg Monroe and even threw a max contract at Enes Kanter. But, alas Aldridge decided he would be better off in San Antonio, closer to his family and perceivably a ring.

The Blazers left at square one, playing I’m not a fortunate son on the fiddle, had to conceive a new plan. No, a new vision. Scour the NBA for diamonds in the rough, young talented players that had yet to reach their prime, with high ceilings and low risk. Portland extended Crabbe, traded nothing for Harkless, draft picks and a player past his prime for Mason Plumlee.

With these moves and the scraps of seasons past, the Blazers put together a young energetic and tenacious team, with a chip on their shoulders. Neil Olshey thought maybe this can work, let’s see what happens. The fans thought this might work. Analysts thought otherwise, giving this untested team little chance to win more than 27 games. By the trade deadline the Blazers had already surpassed that low ball estimate. Neil Olshey, instead of trying to trade for another star or to replace this young nucleus with a veteran. He opted to trade for Brian Roberts, and took on Varejao’s contract for a future first round pick, before waiving the big guy. For the most part, Neil stayed pat, he stuck with the plan to let the cake bake.

The Blazers finished with a 44 win season, and a second round exit to the Warriors, a far better outcome to the season then anyone predicted. The young Blazers who got together before the season, and who will stay in Portland this off season to workout together have proven chemistry and hard work means everything. But, while they are getting in shape, and bettering their game, Neil Olshey has a job to do. With some contracts headed to free agency, a chunk of cap space, and a looming draft, there are a lot of questions to be answered. Big free agent names are being thrown out there, scenarios envisioned. What if we get this guy, or that guy? Should we use the draft for trades or even buy into the draft itself. Olshey will look into all of that, make the moves that need to be made, better this team.

Let’s take a quick step back and look at the bigger picture. What is the next step? What will make this team a contender. Adding a certain guy or two? Time? So far, allowing this nucleus to meld and mesh has done wonders. How much do we want to tinker with it? Will we do more damage than good? We have to make moves, our cap space won’t sit around forever. Eventually, we will have to give McCollum an extension. Point is, we have to make sure we are getting the right guys without fracturing the current chemistry, pulling the cake out of the oven too soon. Al Horford is common name this off season, but is he too old? He has already reached his prime. Can the Blazers even get him? Hassan Whiteside is young and talented, almost exactly what the Blazers need, but he comes with baggage. Bismack Biyombo would bring a needed defensive pedigree, but a stiff price tag. The list goes on. Whatever Neil Olshey and the Blazers decide to do, they need to stay young. Guys like Dwight Howard, past their prime, are not the way to go. The Blazers can win by sticking with the plan.