No Lillard. No Problem. The Blazers without their star guard had an easy night against the flailing Rockets, winning 125-111. They improve to 5-1 on the season. Anfernee Simons took over where Lillard left off, recording a game leading 30 points. Jusuf Nurkic had an efficient 27 points and 15 rebounds. The Blazers continued […]

Professional sports is a business. We are constantly reminded of that fact, as our favorite players leave in free agency (like LaMarcus Aldridge), and our arenas are renamed after failing healthcare corporations. But at the heart of pro sports, there is supposed to be a deep connection between the team and the city it represents. The Yankees and New York, the Celtics in Boston, or the Packers in Green Bay, these teams are built into the bedrock of that town. They are part of the culture…. the community… the sense of that place. So when a team moves away but keeps the same name, as seen with the San Francisco 49ers, or they fire three of the four team broadcasters in one day, it diminishes that connection. It damages that symbiotic relationship between the team and the city that supports it.

This afternoon the Portland Trail Blazers fired Mike Barrett, Mike Rice, and Antonio Harvey, sending many fans into an outrage. Some fans weren’t even so much upset at the firing, as they were upset at how it was done. Rice had been with the team since 1991, Barrett since 1999, and Harvey as a broadcaster since 2005. These men were a part of the Blazer family, and many fans had shared some of the most memorable moments watching them on TV or listening to them on the radio. This is simply not how you treat family. And many of the fans, who feel blindsided, are expressing their anger and frustration over how this was carried out.

But why now? Why make this major change after such a successful season? There is a clear trend in how the front office is conducting business, and if you pay attention to the tea leaves, you can see that this was done for a very specific reason: marketability.

For the past few seasons the team has been moving towards attracting a larger audience. An audience outside of Portland. Hell, an audience outside of Oregon. They want to make this team more appealing to fans of basketball, not just fans of the Portland Trail Blazers. They possess one of the most marketable players in the NBA today in Damian Lillard, who continues to grow his brand and add to his accomplishments. They have a well-liked coach and a style of basketball that’s fun to watch, as demonstrated in their series against the Golden State Warriors in the second round of the playoffs. They have an extremely well-spoken, up-and-coming star in CJ McCollum, who has done national spots for ESPN and has been pursuing his journalism hobby in his offseason. Between Lillard, McCollum, and Stotts, the Blazers have a product that they clearly believe they can pitch on a national level. 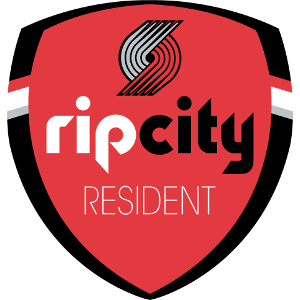 They have been pushing hard to promote the Rip City narrative, which might seem innocuous at first glance, but I see it another way. To fans, the term “Rip City” and “Portland” are one in the same, but the team has been advertising it as a catch-all for fans of the team, no matter where they live. Rip City Resident – it doesn’t mean you live in Portland, at least not the way the team is selling it. Everywhere you look on the team site it says “Rip City.” Go to the Trail Blazers site right now and count how many times you see the word “Portland.” Conversely, they have an entire drop down menu devoted to “Rip City.” You’ve got Rip City United, and Rip City 3-on-3 and Rip City Two. The worst offense of all is the Rip City Resident program, where any fan can proudly wear a shirt stating that they are a resident of Rip City, because Rip City isn’t a real place – at least not in the eyes of the Blazers. Rip City is a state of mind. It’s a magical place where all Blazer fans live. This is the clear shift by the team, away from marketing towards a city and instead marketing towards a much larger audience.

So how does this involve Rice, Barrett, and Harvey? While many Blazer fans enjoy the work of Mike and Mike, they weren’t extremely popular outside of Portland. They were seen as homers, and difficult to listen to. This might not matter to Blazers fans, but if the goal is to attract a national audience, it requires that the team be appealing on league pass. The Blazers are also one year away from potentially changing broadcast partners. Their contract with Comcast runs out at the end of the 2016-2017 season, and the team has to make a decision about their future in the next few weeks. That might include some type of streaming service, so it behooves the organization to find a broadcast team that can appeal to a larger demographic. More viewers means more money. More apparel, more ad revenue, and more marketability overall.

More money is great, but at what cost? A team is supposed to represent the city that they play for. The Trail Blazers are going into battle wearing this city proudly displayed upon their chest. If you disconnect the bonds that tie a team to a city, you create a franchise that’s more corporation than pro sports club. First it was a deal with Comcast that left many Blazer fans out in the cold, then it was changing the Rose Garden to the *gag* Moda Center and jacking up ticket prices, now the NBA is planning on putting advertisements on jerseys and the Blazers are looking to replace three members of the Trail Blazer family that have been there through thick and thin over the past 10 to 25 years. The team needs to reconnect with the local fans and repair some of the bonds that have been broken over the past few years. These kinds of moves will only encourage rumors that Allen plans to move the team when the lease with the city runs out in 2023.