The trade deadline came and went. Reserved would probably be a good word to describe it. About half the NBA sat it out, including the Blazers. Neil Olshey, a little more than a week removed from his single mid season trade, which netted the Blazers Jusuf Nurkic and 2017 1st round pick from the Nuggets in return for center Mason Plumlee and a future 2nd round pick, decided to play his cards close to his chest. No moves at the buzzer, despite holding three 1st round picks and a bloated salary more fitting of a championship contender than a team on the rebuild.

The lead up was exciting. Olshey was sitting on three picks, surely he would cash in 1 or 2 now, and perhaps a contract for a needle mover. Would he move the bungled Meyers contract, or that of Allen Crabbe to chip away at luxury tax ceiling? The Blazers were looking at Okafor and Noel, then Drummond. Damian Lillard’s name came up. It seemed absurd that the Blazers would move him, but DeMarcus Cousins was just traded to Pelican’s so anything seemed possible. Then nothing happened, just some false anticipation. 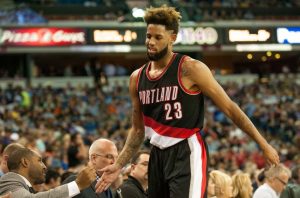 As the deadline was passing, Neil Olshey gave an interview on The Vertical Deadline Show. He  spoke of development and hinted those three picks would be used to bring in young players through the draft. He showed enthusiasm for newly acquired center Jusuf Nurkic, lauded Allen Crabbe, perhaps a little too much. He talked about his expectations for the future of the team. He was realistic about the Blazers free agency woes, and how they bring in value through trades, young low risk talent. Between the lines, there was an evident resignation to the fact that Portland is not a top of the list destination for stars in the NBA. He emphasized that the Blazers would continue to develop players on the current roster and through the draft. A time consuming method of building a team to contend, especially within the window of Damian Lillard’s prime which won’t last forever.

For now maybe no move was a good move, maybe not. Olshey is hedging his bets that the young Blazers who he admits have under-performed turn it around and that the values of contracts like Meyers Leonard and Allen Crabbe go up. Olshey likes to sell high, and most of the Blazers contracts are perceived at a low value at this point in such a down season, where several players seemed to have regressed. He has until next trade deadline to shed salary, but it is not going to be easy if players don’t improve.

There are 26 more games left in the season for players to develop. Hopefully Meyers Leonard came find himself, we can get a better view on what Vonleh is capable of, and Allen Crabbe starts to earn that $75 million. Who knows now that the trade deadline has past and the players can breathe easy again, chemistry will improve and they will get back to the winning ways of last season. Maybe Nurkic will be exactly what the Blazers need, and some inside help will unlock the Blazers offense and help facilitate a defense that has been missing. It may be a long 26 games. We will find out starting tonight when the Blazers start their second half run for the playoffs which they may or may not make. A month from now they could be in the lottery who knows, for now its up in the air.