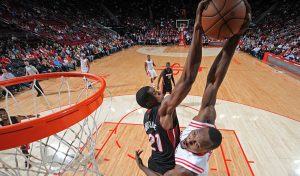 Free Agency is right around the corner and in the next few days I will take a look at some of the more attractive options available. Two of the biggest names will be veteran center Dwight Howard and the recently surprising Hassan Whiteside. While it is a matter of conjecture on how much of a chance Portland has with either of these players, there has at least been some chatter that Portland might be in the discussion with both of them. If one of these a possibility, which would Blazer fans want to see here the most?

Howard can get a full veteran max of around $28+M per year with ensuing raises. (30% of the $94M cap) Whiteside, if he signs with a team outside of Miami can get a max of around $88M over 4 years depending on where the final Cap ends up.  Raises would be maxed at 4.5% which is a bit lower than what they could get with their current teams but Dwight has a history with new Houston coach Mike D’Antoni that doesn’t seem to fit well and has already opted out of his current contract.

Whiteside likes Miami but either he will have to take less to stay there or Dwayne Wade will likely have to take a lot less so Hassan can get the max. $5-6 million dollars may not seem like a big difference between what Howard and Whiteside get but at the end of Whiteside’s contract he will be just turning 31 where by contrast, Howard will be almost 35. $30+ million even with the new salary cap seems like it would be an albatross of a contract by that time.

There is not really a comparison here. Dwight Howard is an 8-time All Star, 8-time All NBA selection, 5-time All Defensive team selection and 3-time NBA Defensive Player of the Year (08-09 through 10-11). However, his last All-NBA or All-Star selection was in 2014 and he’s not getting any younger or more athletic any time soon. Howard has logged over 31,000 minutes played in his 12-year career and although he doesn’t turn 31 till December of this coming season, that is a lot of miles on what some have surmised is less than optimal knee condition. However, Dwight was still tied for 3rd in rebounds per game (with Whiteside) and 2nd in overall FG% at .620 this last season.

Hassan Whiteside burst onto the scene this season after spending time with the Kings, their D-League affiliation and then overseas in China and Lebanon in previous years. To go from there to potentially a max deal in 2+ years seems like quite a jump to many pundits who point out he has really only produced at a high level for one year. But what a season it was.14.2 points, 11.8 rebounds (tied with Howard for 3rd in the NBA) and a league leading (by a wide margin) 3.7 blocks in just 29 minutes per game. Throw in over 60% field goal shooting and you have a legit, young big man who should continue to get better.

“Because Whiteside has been so productive in so few minutes, his per-100-possession stats are jaw-dropping: 24.1 points, 20.8 rebounds and 6.7 blocks. … Not only is Whiteside leading the NBA in blocks, he is also ranked first in Defensive Rating (94) and block percentage (10.2 percent). That means Whiteside blocks 10.2 percent of all two-point attempts when he’s on the floor; to put that in perspective, no other NBA player has a block percentage above 5.9 percent.”

For all of Howard’s immense physical gifts, some feel that he has not been the best leader and has not produced the results you would like to see from such a talented player.  After a solid start with an NBA Finals trip with Orlando, he left for LA in what can only be described as a disaster. Whether that was more on Kobe or Dwight, he played a role in that, and it did not go well. Houston was almost a repeat of LA and though the Rockets made the Western Conference Finals in 2015, this season was a abject meltdown.  Again, many attribute that to Harden and his ball dominating selfishness but Dwight seemed to check out of many games and that is not what you want from a max-type player.

Whiteside brings a different, albeit brief history to whatever team he joins next. Is he the travel weary young center who wandered from D-League to international courts of mystery or is he the defensive minded, rim-protecting juggernaut that emerged last season with the Heat that could at times dominate a game on the defensive end? Hassan struggles away from the basket and in today’s NBA of perimeter play and repeated pick-and-roll offense, his defensive presence can be mitigated at times but in a defensive philosophy like the Blazers’ that has the big man hang back and protect the paint, there may be no one better.

Either player would be a HUGE get for Neil Olshey as Portland has struggled to bring top-tier Free Agents to the Rose Garden. One of the Blazers biggest needs is a defensive improvement in the paint and also to help out Lillard and CJ who are not nearing All-Defensive NBA selections anytime soon.

If you had to choose, which would you rather see in a Blazer uniform?