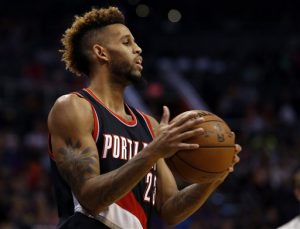 For Allen Crabbe, it’s good to be wanted. The Portland Trail Blazers will be fending off suitors for three restricted free agents this summer, with possibly none more appealing than Crabbe. The 24-year-old shooting guard out of Cal has shown a great deal of growth in his third season, with improvements across the board in shooting, rebounds and assists. With so many teams having cap space this summer, and so few wings available in free agency, this could mean a big payday for the young shooting guard.

Back on February 1st, Bobby Marks of Yahoo Sports, who was once the assistant general manager for the Nets, proclaimed that Crabbe was “on teams’ July wish lists.” He offered not much else, but the writing was on the wall. There are very few shooting guards available this summer, and even fewer that are young and potentially available. Crabbe is fresh off a season where he saw career highs in minutes, scoring, shooting, three point shooting, rebounds, assists, and steals. His minutes increased to 26 per game, his scoring went from 3.3 ppg last season to 10.3 this year, and his FG% jumped from 41% to 46%. Most importantly, he pushed his three point percentage from 35% to 39%, which is key if you’re trying to market yourself as a sought-after “3 & D” guy.

Obviously Matthews had a much larger body of work, and a better reputation as a defender, but he was also coming off a horrific Achilles heel injury that had sidelined him for the rest of the 2014-2015 season, as well as the playoffs. When the Mavericks signed him, nobody knew how long it would be before Matthews was back on the court, and nobody had any idea how that injury would affect him. Would he be the same player that he was before rupturing his Achilles? It was a big gamble by the Mavs, signing him to a contract worth $70 million over four years.

Maybe Matthews isn’t the best comparison, but Danny Green of the San Antonio Spurs could provide a better look at a 3&D guy who cashed in. Green signed a four-year, $40 million contract last summer to stay with the Spurs. He netted that deal after averaging 11.7 ppg off 44% shooting, 42% from three, 4.2 rebounds, and 2 assists in 28.5 minutes per game. Green is four years older than Crabbe, and has really never shown any great improvement in his seven seasons in the NBA. His averages have seesawed back and between 9 and 11 points per game, whereas Crabbe has steadily increased every single season. He went from 2.2 points, 36.4% shooting, and 31.6% from three in his rookie season, to 3.3 points, 41.2% shooting, and 35.5% from three in his second year, and now 10.3 points, 45.9% shooting, and 39.3% from three this last season. Each season his minutes have doubled. 6.7 minutes per game to 13.4 minutes per game to now 26 minutes per game. Steady improvement.

It would definitely seem like Crabbe is ready for a big payday, especially since there aren’t very many options on the open market this summer. At the top of the list is DeMar DeRozan, but the Toronto All-Star has stated publically that he wants to stay with the Raptors. It’s possible that he could leave town, as he’s unrestricted, but they can offer the most money and it’s hard to imagine they would want to break up a team that made it to the Eastern Conference Finals.

Next on the list would be Bradly Beal, but as he’s restricted and the Wizards are almost guaranteed to match, it’s unlikely he will change uniforms this summer. There’s also Dwyane Wade, but could anyone really see the aging star leaving Miami? There’s actually a few old vets on the market, such as Manu Ginobili, Arron Afflalo, Eric Gordon, and Kevin Martin, but those names come with many question marks. Manu is probably inches from retirement, Afflalo isn’t the same guy he was in Orlando, and Gordon is a shadow of what he was in LAC. Marin is a role player at this point, so who’s left?

If you keep going down the list of names, you find some younger guys like Jordan Clarkson (restricted), Evan Turner (unrestricted), Kent Bazemore (unrestricted), and Evan Fournier (restricted). All could be enticing, and we will certainly keep an eye on where they land and for how much, but the buzz surrounding Crabbe is growing. Bryan Toporek of Bballbreakdown.com listed him as one of their “Five Potential Steals in the NBA’s 2016 Free-Agent Class,” and Haven Kaplan-Miner stated that Crabbe “is considered by most one of the most appealing restricted free agents in the NBA and sure to receive contract offers exceeding $10 million per year.”

It is very likely that we will see one or two of the many teams with cap space this summer throw a sizable offer at Allen Crabbe. The question is for how much, and how long the Blazers will have to match, because Portland GM Neil Olshey will be desperately trying to swing a deal with their own cap space before securing his three young free agents. If a team can get Crabbe to sign before the Blazers have used their space, Portland could be in a situation where they have to choose between losing their young shooting guard, or potentially bringing in a starting-caliber player to go with Damian Lillard and CJ McCollum. That would be a nightmare scenario for Olshey. Regardless of how things play out for Crabbe, it must be nice to feel wanted.