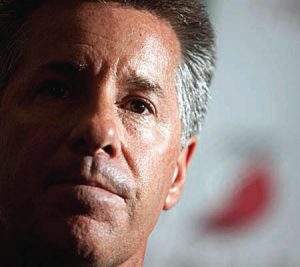 Two days removed from the 2016 NBA draft, the Blazers are left with an ultimatum. Free agency or nothing. The draft saw other teams in the west get better, like the Suns who drafted Dragan Bender, Tyler Ulis, and traded for Marquese Chriss. The Timberwolves added Chris Dunn to their already intriguing fountain of youth. Oklahoma City traded Serge Ibaka for Oladipo, Illyasova, and future draft picks, to convince Durant to stay. The Nuggets drafted Jamal Murray, Juan Hernangomez, and Malik Beasley. Even Utah got better, trading for George Hill. As these other teams took steps forward, Blazer fans hoped that Neil Olshey would jump in the fray, make a crazy lopsided deal, and bring needle moving talent to Portland.

Instead, the Blazers quietly bought into the draft in the second round at the 47th pick and took Jake Layman, a 6-9 forward out of Maryland that seems to be somewhere between Victor Claver and Luke Babbit, perhaps a better shooter then the former and more versatile then Babbit. Still, Layman is a far cry from moving the needle, taking the Blazers to the next level. Seems disappointing right? But, then again shouldn’t we have expected this? It is Neil Olshey’s common sense stance, not making moves just to make them. No doubt, the man behind the curtains was blowing up phones, and searching for trades that made sense, and just couldn’t find any that fit, so he did the next most practical thing. He waited till the 2nd round where players contracts aren’t guaranteed, and there is no cap hold. There he snagged, Jake Layman, a just in case guy, a versatile player that could play and guard multiple positions. Perhaps, he is saving the best for last. For the Blazers sake he’d better be.

July 1st could be make or break for the Blazers future. Neil Olshey’s job is far from simple, do the impossible. Do what the Blazers have never been able to do before. Draw a big named free agent to Portland. The Blazers, after a season beyond any conceivable expectation, are grasping for a national platform. They fired three of their broadcasters, and brought in Kevin Calabro, the ex Sonic’s voice and face, and look to finalize a TV deal that would expand the Trailblazers fandom to include all of he NW. It is feasible that big names like Al Horford, Hassan Whiteside, or dare I say it, Kevin Durant, could look at the Trail Blazers success last season, and their enlarging market, and decide to give Portland a chance.

If anyone can make that happen it’s sly as a fox, Neil Olshey. No doubt, he’s been working the agents and letting them know who he’s going to gun for come July. The war room is probably chaotic, dry erase boards covered in names, plan a, plan b, and so forth. The blaring of ringing phones off the hooks, echoing throughout. Papers full of stats scattered like a tornado just passed through. It’s an exciting moment, but it’s also a stressful one. The Blazers have the money now, they won’t next summer after extending CJ McCollum….they have to act now, cannonball, make a giant splash. Because if they don’t succeed in bringing in a big free agent this summer, they might never do so. This is the Blazers chance to leave mediocrity, and throw their hat in the ring, as a win now contender. If they want to dust off the 1977 championship banner and hang a new one next to it, this is the next crucial step.

Neil Olshey, has stated that the Blazers will remain on the same path as he started them on a year ago. But, he has also sworn that if opportunity calls, he will open minded. He wants to go after a veteran presence, a player who has proven they can move the needle. Al Horford would give the Blazers a third scoring option and secure the front court. Hassan Whiteside would offer a young up and coming star that fits the age arc of the current team. Kevin Durant would cause blazer fans to bow to the basketball gods. Olshey and the Blazers could bask in glory. But, as it stands Portland fans are nervous for the future of their team. They know this is a moment that will define their team for years to come. It’s time for Neil to prove he is the best, that the NBA was wrong for not giving him the GM trophy after last season. If he pulls this off, he’ll be a king, if not he’ll be hated and blamed, and have to endure the wrath of the Blazers fan base. He may never live it down. So Neil put on your best suit, and get to work because it’s go big or go home. No pressure.