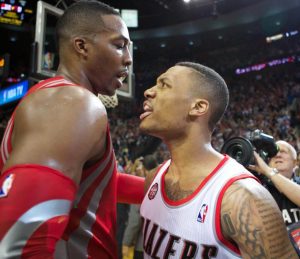 So, I hear you want to sign Dwight Howard.

Dwight Howard, along with Al Horford and Hassan Whiteside, is one of the most talked-about free agent centers; and naturally, since Portland has a max-contract-sized hole in its cap space, the Trail Blazers are considered to be a front-runner for the player formerly known as Superman.

I say formerly because, though I’m sure his fans still love him, the last four years haven’t been kind to Howard’s reputation. Traded at 26 to the Lakers, Howard was supposed to be a piece that gave an aging Kobe a few more chances at getting his sixth ring. But, a season that began with Mike Brown being fired ended with the Lakers getting swept by the Spurs in the first round. The next three years saw Howard in Houston, where things seemed (at first blush) to be a much better fit.

After getting bounced by the Blazers in 2014, the Rockets made it all the way to the Western Conference Finals in 2015. But in 2016, the Rockets came off the rails, with plenty of blame to go around. A good portion of that blame has fallen on Howard’s exceptionally wide shoulders.

Maybe it’s that his hips are exceptionally narrow, and his shoulders are normally wide. Whatever.

During those four years away from Orlando, Howard has logged one season where he looked like Superman (the 2013-14 season in Houston). But, from a raw points standpoint, his four worst seasons have been his first two with Orlando, and his latest two with Houston. Raw points being what they are, though, they don’t tell the entire story.

It’s Not the Years, It’s the Mileage… Except When it’s Both

Despite his lower scoring totals, Howard’s Field Goal percentage has been remarkably steady: over the last 10 years of his 12-year career, he’s shot over 57% every year. And last season, he shot the best of his career, a stupefying 62%. Even when you account for his worsening Free Throw percentage, his True Shooting percentage was still 60.4%; fifth best of his career, and sixth best among centers last year (Whiteside and previous Blazers target Enes Kanter were first and fourth, respectively)

What he doesn’t have anymore is the Superman athleticism. Watching his highlight reels from last season show that he’s not jumping as high, not running as fast. He’s older now, which means the mileage is becoming a factor. Howard in Orlando was a high minute player, logging 2800+ minutes per season six years in a row, which would have been seven if not for the lockout-shortened 2011-12 season (he averaged 38.3 minutes per game that year).

With Houston, Howard averaged 32.2 minutes per game, much more sane for a player his age. This, coupled with an offensive scheme no longer focused on Howard, means his numbers look less impressive, but he could sustain those numbers longer.

The questions facing the Blazers then become: are those numbers worth the price tag that comes with Dwight Howard? If not, how much would he have to improve to be worth the money?

Will Dwight Get Better?

This comports with conventional wisdom too: when a player reaches his eighth year or so, that player is pretty much maxed out in the role they’ve inhabited. They can adjust their role, focus it to the basics, use a less athletic version of it to stay effective (Tyson Chandler, Michael Jordan, Moses Malone, even LaMarcus Aldridge were able to make this pivot). But unless you have that second axis to pivot on, you fade away doing the one thing you’ve been able to do your entire career.

Howard has been very consistent throughout his career, playing basically the same game all throughout. It would take a major improvement in an underserved area, like Free Throw shooting, to change how other teams play against him, and thus allow Howard to change his game. It would be like Michael Jordan focusing on his post up game. If he wanted to improve, he probably could. The question is: does he want to?

Will the Blazers Get Better?

Last summer, Neil Olshey made a number of bets on young players with depressed value on their current teams, with hopes that one or two would give profits. Al-Frouq Aminu and Ed Davis signed 4-year and 3-year deals as free agents. Mason Plumlee and the two years of his rookie deal came over in a trade with Brooklyn. In the playoffs last year, those three players were second, third, and fourth on the team in PER behind Damian Lillard (if you discount the eight-minute performances of Luis Montego and Pat Connaughton). All three of those deals paid off in spades.

With Ed Davis too small to start at center, and too limited offensively to start at power forward, Plumlee got the nod last season. It’s interesting to note that his deal is the smallest and shortest of the three major signings. If one believes that Neil plans several moves ahead, the starting center position is the most temporarily filled right now.

But Plumlee has made a case for himself staying, too. In fact, comparing 25-year old Plumlee to 30-year old Howard in stats muddies the case for Howard a little:

Normalizing stats per possession is a good way to flatten out the differences in style of play, to give you an idea of how effective a player is one shot at a time. In the above statistics, you can see the tradeoffs between Plumlee and Howard: Howard nets you more rebounding, and scores more points himself than Plumlee, but Mason provides more assists, which means that overall the team scores as well with him (112 per 100 possessions) as a team would with Howard (111 per 100 possessions).

You can’t really make the case that Plumlee is as good as Dwight Howard individually; Howard still scores more, knows how to get the ball in the right place to shoot 60+ percent from the field, and gets better positioning for rebounding than Plumlee does. An eye-test viewing of games bears this out as well. But there are other things to consider, including cost—Howard will command north of $25 million a year, while Plumlee will make $2.0 million next year—and career arc: Plumlee is 25, and low mileage at 5102 minutes; Howard is 30 and has played 31,092 minutes.

Over the next four years, Mason Plumlee will (probably) not turn into Superman-era Dwight Howard. But he has a much better chance of playing better over those four years than Howard would over the same span. Plus, even if he’s signed to a max contract after next year, Plumlee will be cheaper than Howard.

Does He Do Windows?

Which brings us to the ultimate consideration: the Trail Blazers’ championship window. Neil has been making moves that correspond to Lillard and McCollum’s perceived peak, acquiring players in the 23-26 year old range. The assumption here is that, by the time Lillard and McCollum are 28, the rest of the team will also be around the same age or younger. By the time this window begins, Howard would be 32, and possibly aging out of his skill set entirely, with two years still left on his contract.

Howard could accelerate that window opening, if he finds his game in Portland, accepts his role, and regains his enthusiasm for the game. But he’ll always be half a career older than the core of the team. From that standpoint alone, the notion of signing Dwight Howard seems at odds with the rest of the Blazers strategy. Whiteside seems to be the most in line with the strategy (outside of somehow trading for Kanter or Monroe), but even he has a couple of yellow flags about motivation and personality.

The team has made moves that have a focus: build around Lillard and McCollum, regardless of what the immediate returns are. It seems that, unless Lillard and McCollum see something in Howard and convince Olshey and Stotts that it is the right move, the plan will probably be to acquire a younger center (Whiteside, Cole Aldrich) or stand pat with Plumlee and focus on getting a third scorer at another position. Any of those options will be cheaper, better, or both.