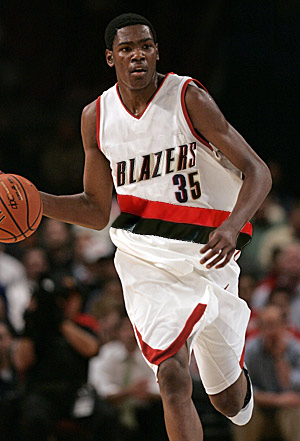 This summer a hodgepodge of free agent names will find themselves on notepads on the desks of GMs, and on dry erase boards behind closed doors in front offices around the NBA. Key among them will be Kevin Durant’s. Every team with cap space will send out their star players and personnel to woo him. Miami, Boston, New York, Los Angeles, and even yipes, Golden State have all surfaced as possible destinations. Why not Portland? We’ve all heard the excuses. Portland is too small of a market. It has never been a place that has lured big name free agents. The team isn’t a contender. Analysts have speculated that Durant won’t even look Portland’s way.

Even after all that, Durant hasn’t said no. In fact the two things he says he is looking for in a team remind me an awful lot of a certain group of guys in the North West. “Just being around great people, just being in a great basketball environment.” That sounds a lot like the Portland Trail Blazers to me. Portland this past season has been a petri dish of positive culture, players and staff alike sharing a mutual respect, and a healthy ambition. This is the place Durant was speaking of. Come July 1st, it will be open season, and teams will flock to Durant, the prize possession. Neil Olshey will have his work cut out to him.

Before Olshey drops cap holds and releases players to make room for what’s sure to be a behemoth of a contract for Durant, he should ask himself a single question. Portland may be a perfect fit for Durant, is Durant a perfect fit for Portland? While Durant would no doubt make the Blazers better, on paper at least. Could he temper his ego to play second fiddle to Lillard, or even third if McCollum has anything to say about it. Even if he could, the Blazers would have to give up prized restricted free agent Allen Crabbe or say good by to Meyers Leonard. The Blazers are already likely to let Gerald Henderson walk away, can they afford to give up another shooting guard? Or other pieces for that matter should it come down to a sign and trade. Durant could be the third offensive piece that would take pressure off of Lillard and McCollum, and make Portland’s offensive threat the Leviathan of the NBA. Imagine the possibilities.

While Kevin Durant is a very enticing piece, and could bring Portland back to contendership for years to come, Neil Olshey will have to search himself for whether or not Durant is worth the risk. Getting Durant would also mean the Blazers would be out a high end free agent big man, it would shift the roster dynamic and possibly the chemistry. It all comes down to Neil Olshey’s vision for the Blazers future, and whether Durant fits into that or goes against the grain. Is Durant worth the risk? Is he Portland’s answer? I guess we will find out.