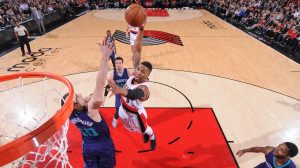 It was just three short years ago that the Portland Trail Blazers added Robin Lopez to a core of LaMarcus Aldridge, Nicolas Batum, Wesley Matthews and a very young Damian Lillard. There were hesitant expectations as the team had certainly over-performed for a large part of the previous season with an undersized JJ Hickson at center. Now with the addition of the defensive minded twin of the Lopez brothers, there was reason for optimism to start the new year.

Lopez (25), Aldridge (28), Batum (24), Matthews (27), and Lillard (23) were young but had the experience needed for success and all but Lillard had spent several years in the league already. The resulting combination produced a whopping 21-win improvement.

Then this last off-season things changed…drastically. When you lose four of five starters, you just don’t do what the Blazers just did.

This current edition of the Trail Blazers is at a somewhat similar juncture as they were just a few short years ago. The young Blazers just blew away their preseason expectations of a win total in the mid-20s and in a somewhat historically down year for the West, claimed the #5 Playoff position and then took advantage of some (No Good) Clipper injuries to advance to the 2nd round against the defending champion Warriors. It was a 4-1 series win for Golden State but Portland actually led the majority of minutes in the series and much like the Thunder just experienced, had difficulty closing games.

Now a roster of Lillard, “McCallum” (if you ask most prime-time broadcasters), Aminu, Plumlee, Vonleh, Davis, a few Restricted Free Agents and a couple of non-guaranteed contracts is ready to take the next step.

But what is their area of greatest need? Once upon a time it was adding a veteran PF in Buck Williams that helped take the Blazers to two NBA Finals. Then in a 6-for-1 trade that brought in 6-time NBA Champion Scottie Pippen, had the Blazers on the brink of a return trip to the Finals before a 4th quarter meltdown that still causes some Blazers fans painful memories.

There are some specific areas of need which include another play-maker, a defensive presence in the middle and defensive ability in the back court that Allan Crabbe may be able to fill if he returns and re-claims his minutes along with inheriting those of a likely departed Gerald Henderson.

This is a younger roster than those 1989 and 1999 versions that rose to serious contender status but does that mean it’s too soon to take that step? Make a move now, get to 55 wins this season and by next year I think you are looking at a very good Blazers team that has a very solid contender window going forward for 3-4 years.

If history tells us anything, in a year almost everyone has cap room to use, it will take something of creative trade for the Blazers to get an impact player unless Neil Olshey can do what really hasn’t been done before…getting a star Free Agent to come to Portland.

Either way, the ladder is ready to be climbed. Just how far up those rungs the Blazers go may depend a lot on Olshey’s magic this summer.