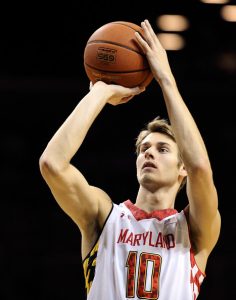 In one of the more active, crazy, and surprising Draft days in recent memory, the Portland Trail Blazers chose not to sit out the day completely. They engineered a trade with the Orlando Magic sending a reported $1.2 million in cash and a 2019 2nd Round Draft pick in exchange for Jake Layman, a 6’9″ PF/SF out of Maryland.


Tale of the Tape:

First of all, Layman is a shooter. He shot 39.9% from 3-point range in his Senior year as a Terrapin but showed that he is not just a catch-and-shoot product by making over 60% of his shots inside the arc. That resulted in a ridiculous TS% of 64% which was tied for 4th in the entire country in his final year at Maryland. While shooting his his strength, he can be very streaky at times and for someone who shoots as well as he does, can also have some very bad misses.

While he really can shoot it, and can score a little from the inside, that is the majority of his strength so far.  He is also a very good athlete with a max vertical of 39.5″ and can be very explosive especially going to his right. However, he did have one of the shorter wing-spans for a player of his height at the Draft combine and although he has added on 30 pounds since high school, at 210-220, still needs to add some strength. He can get pushed around at times and also isn’t always as aggressive as you’d like. That could cause a challenge for him in the pros because while he has some quickness to guard on the perimeter, it’s tough seeing him match up with many of the bigger small-forwards or stronger stretch 4’s so his position could be limited. That said, he is used to being a versatile defender guarding multiple positions so we will find out shortly if that can carry over to the NBA.

Shooting proficiency aside, Layman will give you solid but unspectacular production in other places.  He averaged 5.3 rebounds per game in just over 31 minutes while also collecting an assist, steal and block per game. He also showed the ability to stay out of foul trouble averaging only 2 per game which is encouraging given that he was guarding multiple positions and can be overpowered at times due to lack of strength and size. He greatly needs to improve his ability to handle and create with the ball as he is severely limited in that aspect and had an almost 2-1 turnover to assist ratio.

Olshey had all night to watch a myriad of trades and player movement and so Blazer fans can be encouraged that he actively targeted Layman as the player they wanted to go get with the limited trade resources he had. Fans will also get to see him shortly at Blazer Summer League as the first game is Saturday, July 9 against the Phoenix Suns. But this is only the beginning.

Free Agency is next and that is where Portland should make much bigger moves. One week to go….