The Portland Trail Blazers have signed center Enes Kanter for the remainder of the 2018-19 season. Kanter last played for the New York Knicks who tried to trade him at the deadline, but could find no suitor to take on his $18 million dollar contract. They waived him shortly after the deadline.

Kanter passed on the Boston Celtics, Los Angeles Lakers, and Houston Rockets, who were also looking to add him, to join the Blazers. He took to twitter to confirm his signing with Portland. 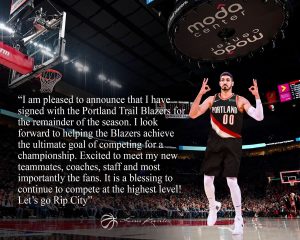 The Blazers signed Kanter with their veterans minimum of $653,000. He has a career average of 11.9 points and 7.6 rebounds per game. He will step in as Portland’s back up center. He will immediately help the Blazers second unit front court with rebounding and scoring.