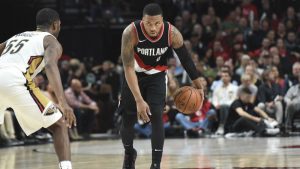 I am going to break a rule today. I am not going to write as a sportswriter or an analyst. I am going to speak as a fan. It is ironic I use the word speak, because as I write this I have no voice. I lost it last night trying in vain to scream the Blazers to a victory. I don’t regret it. I will, however be frank. Blazer fans do not deserve this. As I say that I know that there are other fan bases who are probably less fortunate, some that have not seen many a playoff, let alone having won even a single championship. Blazer fans though, have endured a special kind of adversity. As a fan of the team for nearly 30 years, I am very familiar with it.

I started watching the Blazers when I was three years old. I was born in Texas far away from Portland, but that didn’t keep me from becoming a fan. Whenever my dad would put a basketball game on, a certain team garbed in black and red jerseys caught my eye. I always rooted for them. My dad would say son, you are rooting for the wrong team. And, I would say no dad, that’s my team. That team of course was the Blazers. As fate would have it my family moved to Portland a few short years later. The rest is history…well not quite.

I grew up playing basketball on the local court down the street. I would meet up with other kids from the neighborhood, especially after Blazer games, to talk and play basketball. We celebrated the wins and shared the angst of losses. Some of those loses were hard ones. It was those games, when we brought our toughest ball. We played hard, no blood no foul rules. I played with broken fingers and jammed toes. I had teeth knocked out. Concussions and black eyes from stray elbows. I guarded guys twice my size and I stopped them. I rebounded, passed into assists, shot through rough contact and made the basket anyway. All inspired by my love of basketball and the tenacity and perseverance of the Blazers. They have shown me adversity is a challenge to be sought out and overcome.

Being a fan has also taken its toll. I wasn’t yet alive to witness the 1977 championship, or old enough to understand the repercussions of picking Bowie over Jordan. But, I remember the two trips to the finals in the early nineties, only to be let down. I remember Drexler leaving to win a trophy with the Rockets. I remember the Blazers attempts to rebuild something tangible into the mid nineties, all those first round exits. I remember the 2000 Western Conference finals, though I like every other fan, wish I didn’t. It makes me nauseous to think about. I remember the Jail Blazers. I was there to be teased by the hype of Brandon Roy, only to watch his knees fall apart. I was there when the Blazers picked Oden over Durant, only to have Oden “Benjamin Button” us. I threw up my hands when Wesley Matthews blew his Achilles. I shook my head and laughed at the basketball Gods when the Texas Turncoat (LaMarcus Aldridge) walked away the following summer, after promising he was a Blazer for life. Maybe he is a complete ass, or maybe he saw the writing on the wall.

I couldn’t tell you when the Blazers might win it all again. As a Blazer fan and a homer I claim unrealistically every year, that this will finally be the year. And, when the Blazers get knocked out, I dissolve into the subtlety of my anguish, and then reform again spirited for the next season. The mediocrity is maddening. And after not only losing home court advantage, but dropping the first two at home in such a chaotic fashion, I cannot help but to be drawn back into the doubts. How will this ever get better? Stars don’t want to come here. They see how the NBA treats Portland. They want none of it. The Blazers are stuck building from the draft, and entertaining a revolving door of role players, that never seem to work out. The Blazers have Damian Lillard, the star who can’t seem to shine bright enough. His best pal CJ McCollum who openly flirts with star status, but can’t quite achieve it. Not to mention a supporting cast who is inconsistent to say the least. Blazer fans, the best, the loudest in the NBA don’t deserve this mediocrity, this playoff tango.

Even still, I will root for them tonight, and every other night they play because I am a fan. Yeah, I have doubts, but whenever those negative vibes enter my mind, I think back to those games after Blazers losses on that court down the street of my childhood. Then, I remember the team I grew up watching. I remember my broken bones and teeth. I remember to persevere. I hope the Blazers remember too, remember themselves tonight and the rest of the playoffs, remember what they are capable of, and bring their toughest ball.