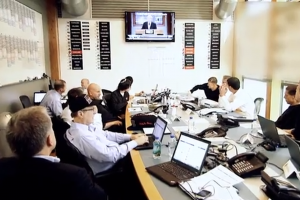 It’s been a long time since so many teams have had this many multiple Draft picks. That means for teams wanting to move up or for teams that don’t have a pick at all (CLE, MIA, NYK, OKC, POR, and WAS) there are a plethora of opportunities to do just that.  In fact, it is an almost certainty that teams like Boston, Denver and Phoenix don’t make all of their selections. Depending on how high up a team wants to go just depends on what they are willing to offer as there will be Draft picks moved.

Here is a list of teams with 3 or more selections:

That is 33 picks (more than half of the entire Draft) split up among just 8 teams. But then of course you have to give to get.  Will it be like years ago when Paul Allen just bought Phoenix’s pick? Will it take a future asset like the 2018 1st round pick acquired from Cleveland in the Varejao trade? What about someone like Plumlee, Vonleh, Aminu or Connaugton who are all young players on inexpensive contracts?

Neil might be working on the 2nd tier of players that is 3-4 years behind the 1st tier such as Vonleh, Alexander, Montero, and Connaughton that will pay dividends down the road. For now, Damian Lillard will be 26 this summer and Olshey has talked about players in his age group growing with him. By the start of next season, Mason Plumlee will be (26), Aminu (26), McCollum (25), Davis (27), Crabbe (24), and Leonard (24). All fit in that 2 year age window with Maurice Harkless just behind. That leaves room to restock a younger developmental player like Thon Maker and also add a veteran in the mode of Chris Kaman via trade.

Whatever it is, there is ample opportunity for Olshey to get into this Draft if he identifies a player he wants. As for Olshey not having a pick, “We always have a draft pick, we work for Paul Allen.”

That is a good place to be and don’t be surprised if there is some Blazers activity on Draft night.