I am a diehard Blazer fan and a college basketball player. torey@blazersland.com 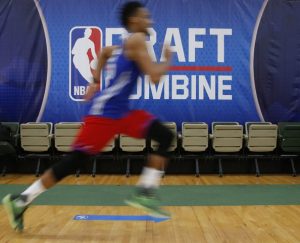 Last year, the The Portland Trail Blazers traded their 2016 first round pick at the trade deadline for Arron Afflalo, in what was then seen as a deal that needed to be made, however, the trade resulted as a bad one for the Trail Blazers. Afflalo never found his groove playing in Portland’s offense and left after the season. Will Barton, who was also part of the trade, broke out in 2016 as one of the most improved players in the league playing for the Denver Nuggets. He averaged 14 points a game and was a spark plug off the bench. The draft pick Portland gave up was lottery protected, meaning that Portland wouldn’t have to give up the pick if they missed the playoffs. This created a debate between Blazer fans about whether or not the Blazers should try to miss the playoffs. They won, made the playoffs and lost the pick.

The Blazers have no pick, however, that is not to say that the Blazers won’t end up with one or two rookies after draft day. Neil Olshey is arguably the best bargain hunting GM in the league. While Dame DOLLA and K-Love drop dimes, Olshey drops pennies and manages to pick up dollars. This was evident at the trade deadline a few months ago, when Olshey turned a Tim Frazier roster spot and a future 2nd into Brian Roberts, Cleveland’s 2018 1st Round Pick, and Miami’s 2021 2nd Round Pick. That Cleveland pick will be the biggest asset that Olshey can use to move into the first round. That pick will be in the low 20’s as long as Lebron doesn’t make another “Decision”. Therefore, Portland should probably look to trade Cleveland’s first round pick instead of their own. Olshey and Paul Allen will explore the option as Olshey was quoted saying “We always have a draft pick. We work for Paul Allen.”

Here are a few teams Portland could strike a deal with.

They hold the 7th, 15th, and 19th picks in the 1st round. They’ll likely look to trade that 19th pick or use it on a draft and stash guy like Ante Zizic or Ivica Zubac

The Philadelphia Seventy-Tankers hold the 1st, 24th, and 26th picks in the draft. They could very well add another first round pick if they trade on of their bigs. Picks 24 and 26 will be obtainable.

It all boils down to a couple thing for Olshey when it comes to making the decision to trade into the draft or not. Are the guys he likes available and how much does it cost to go get them? If one of his guys falls in the draft, and he can get him for a small offering, then Olshey will pull the trigger.

Here are a few guys to watch for:

Prince is my favorite sleeper in this year’s draft. He plays harder than anyone on the court, and has the tools and the motor to be a lockdown defender. Prince also is a very solid shooter, unlike Rondae Hollis-Jefferson, who the Blazers drafted and traded to the Nets for Mason Plumlee last year. Given his skills, it seems like he will easily develop into one of the best 3-and- D wings in the NBA. However, that isn’t helping him get drafted higher, just like many 3-and- D wings in the past, who have outplayed their draft selection in the NBA. Go through previous drafts and look at the diamonds in the rough. Most are 3-and- D type players.

It’s common knowledge that the Blazers will go after some frontcourt help in free agency. However, to get that help they’ll have to let Gerald Henderson walk and replacing him won’t be an easy task. I think Bembry is a perfect fit as a do it all wing. Bembry strives as a ball handler who can attack the rim and make plays for others, which are skills that the Blazers need out of someone other than Damian Lillard and CJ McCollum. He’s a solid defensive presence with the potential to guard multiple positions.

The most impressive thing about Bembry is his hair, along with instincts and a feel for the game that you just can’t teach. His mediocre jumpshot is the reason he’ll fall to the later parts of the first round, but you can teach a better jumper. If the Blazers Brass can turn Meyers Leonard and Al-Farouq Aminu into near 40 percent three point shooters, then I have no worries about Bembry developing his jumper as a Portland Trail Blazer.

The stories out on this kid. The first player since 2005 to come straight from high school is a project player with rare skills for a 7 footer. He has shown the potential to shoot the 3 and handle the ball, as well as record breaking athleticism for a 7 footer. Blazers coaches have shown a knack for developing talent, and while they have a high upside player they hope to develop in Noah Vonleh, it’s never a bad thing to add a guy with Maker’s upside.

Levert would be a first round pick if it wasn’t for his injury history. He’s had major problems with his left foot and has a thin frame. However, Levert is a very versatile player as a 6’7″ shooting guard, with good ball handling, spot up shooting, and the ability to create for himself and others. Levert would be a good fit as a 3 rd ball handler and I like him as a lottery ticket pick for Portland. If he can stay healthy, he could be a contributor off the bench.

Hammons wouldn’t be the sexiest pick up by any means, but that’s because of his age and potential. He’s almost 24 and his ceiling is relatively low, but he could still be inserted into a rotation as a backup center and hold his own right away. At 7’0 tall and 280 lbs, Hammons is nimble for his size while giving you good rim protection and touch around the basket. Given that the Blazers didn’t have a true 7 foot center outside of Chris Kaman last year while their frontcourt struggled to protect the rim and finish in the paint, Hammons could provide some things the Blazers are missing. With the center position being in flux this offseason in regards to Meyers Leonard’s free agency and Mason Plumlee’s trade value, Hammons would be good insurance whether it be as a backup or a very solid 3 rd stringer.

Son of the former Seattle Supersonics great Gary Payton, Gary Payton had a great season leading Oregon State to their first NCAA tournament birth in 26 years. He’ll give you good defense and athleticism, but not too much else. However, he compliments Lillard in McCollum perfectly as he’s big enough to guard either guard spot, which would allow Stotts to play him in spurts and move Lillard off the ball. Brian Roberts will likely walk away in free agency, so Portland at the very least will need a 2 nd PG just for insurance in case of injury.

This list wouldn’t be complete without an international sleeper. Papagiannis is massive, reportedly standing at 7’2, maybe even 7’3. He’s mobile for a big man, and offers you some mid-range shooting and rim protection. He reminds me of a very poor man’s Porzingas, who Olshey looked hard at in the draft last year. The knocks on Papagiannis aren’t skill-based, but instead about his conditioning, strength, toughness, and motor. But he’s only 18, and those things are fixable.